We often don’t realize how much we take someone for granted until we almost lose them.

Last Christmas day, on 25th December 2014, I found myself in that precise situation – my mum had suffered a heart attack as a result of clogged arteries, and was in the midst of a stent operation back in Singapore. All I could do then was to pray as hard as I could where I was in the province of Buenos Aires that her surgeon would be able to keep her alive.

Thankfully, God answered my desperate prayers for her safety and after a 45-minute operation which felt like forever, mum was wheeled out of the operating theatre, tired and groggy, but conscious and alive. Apparently, my mum’s heart stopped two times during the surgery, and it was truly God’s grace that brought her back. 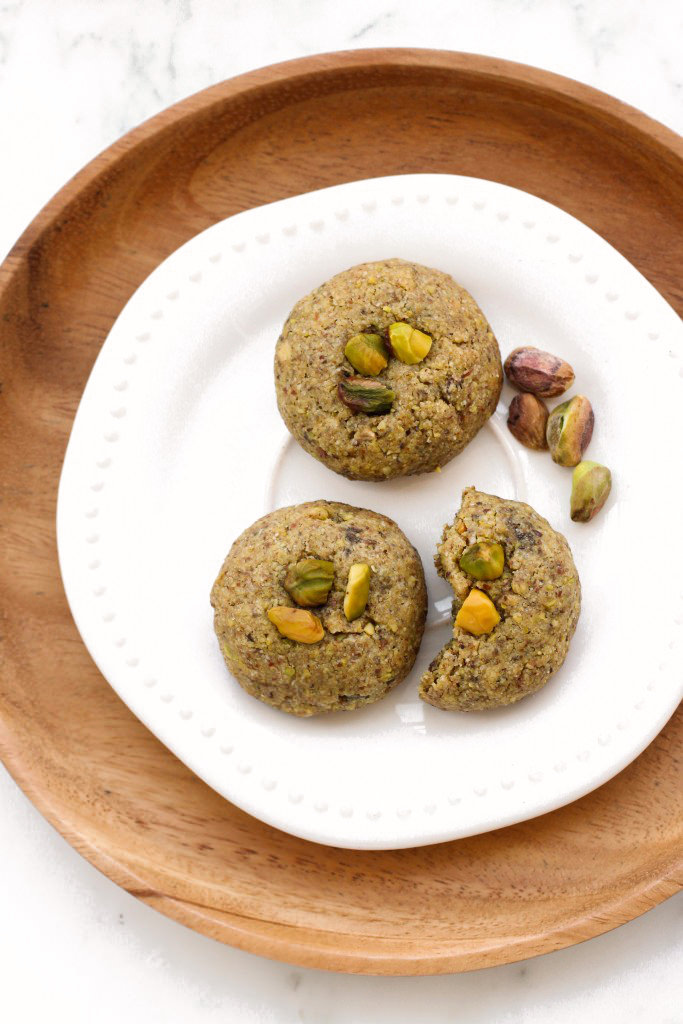 When I called my Aunty Adeline, who was at the hospital to give my father emotional support, she passed the phone to my mum, and the first words out of my mouth was “Mummy, I love you,” my voice cracking with emotion – from pure relief and the shock that I’d been so close to losing her.

My beautiful mum, who is this strong, wonderful woman that puts everyone else before herself, told me, “Don’t worry darling, I’m OK.” Her voice was weak, a result of the anesthetics and the ordeal her body and heart had just gone through, and as I listened to her speak, my eyes glistening with tears on the other end of the line, I was determined never to take her for granted anymore. 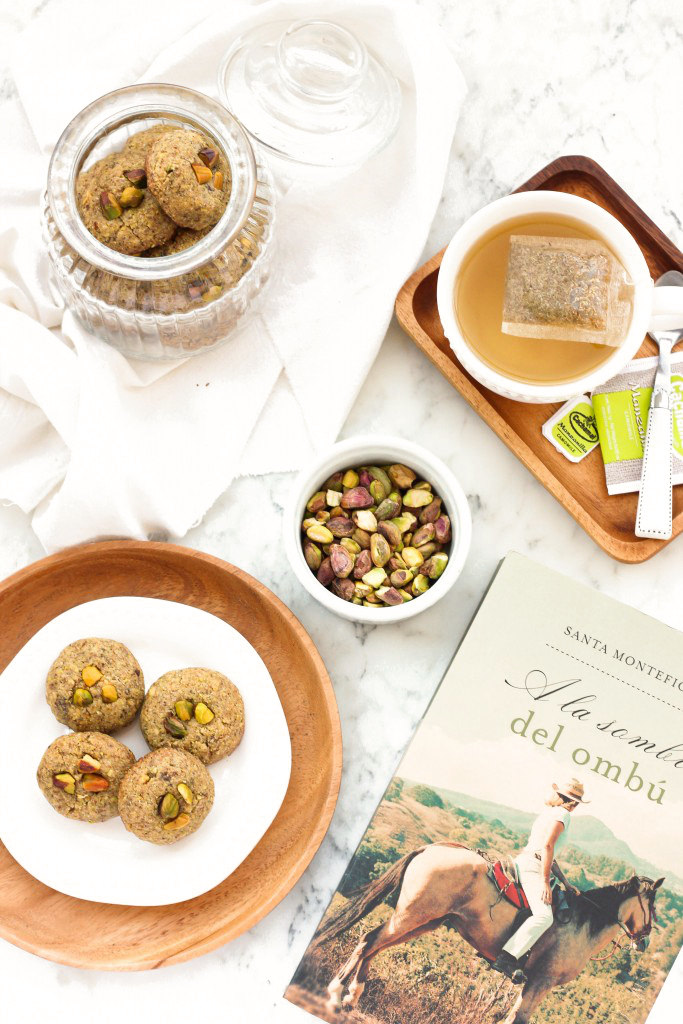 Later, when her doctors ran a couple of other tests, they found that my mum had an extremely high resting blood glucose level, and they diagnosed her with Type-2 diabetes (also known as “adult diabetes”), the condition in which the pancreas is unable to naturally produce sufficient insulin to metabolise the carbohydrates and sugars digested by the body, resulting in dangerously high blood sugar levels.

When I got over the initial stage of shock, the question that came to my mind over and over again was – “How did that even happen?”

My mum took her vitamins on a daily basis and neither drank alcohol nor smoked.

How did her arteries end up so clogged that she experienced a heart attack, and how did she end up becoming diabetic? 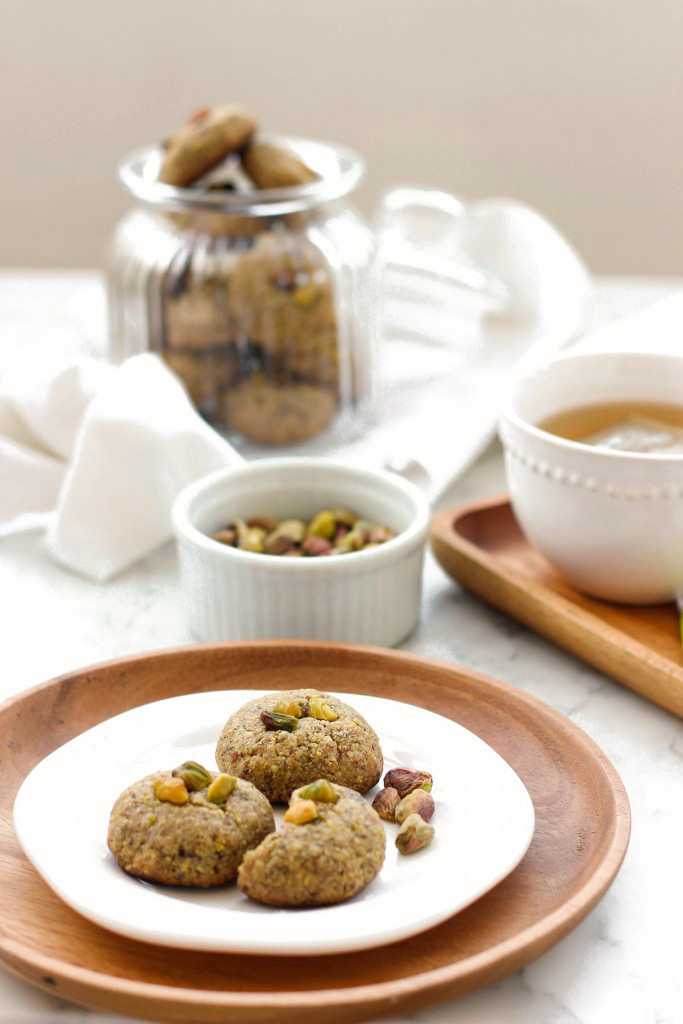 In retrospect, I realized that her sedentary lifestyle and a diet heavy in carbohydrates and processed foods was probably the reason for what happened.

Her previous diet, one that was largely made up of high-glycemic index foods (foods which greatly raise your blood sugar levels when digested), had led her to a state of insulin resistance (the phenomenon in which your cells fail to respond to the normal actions of insulin), which ultimately led to Type-2 diabetes. 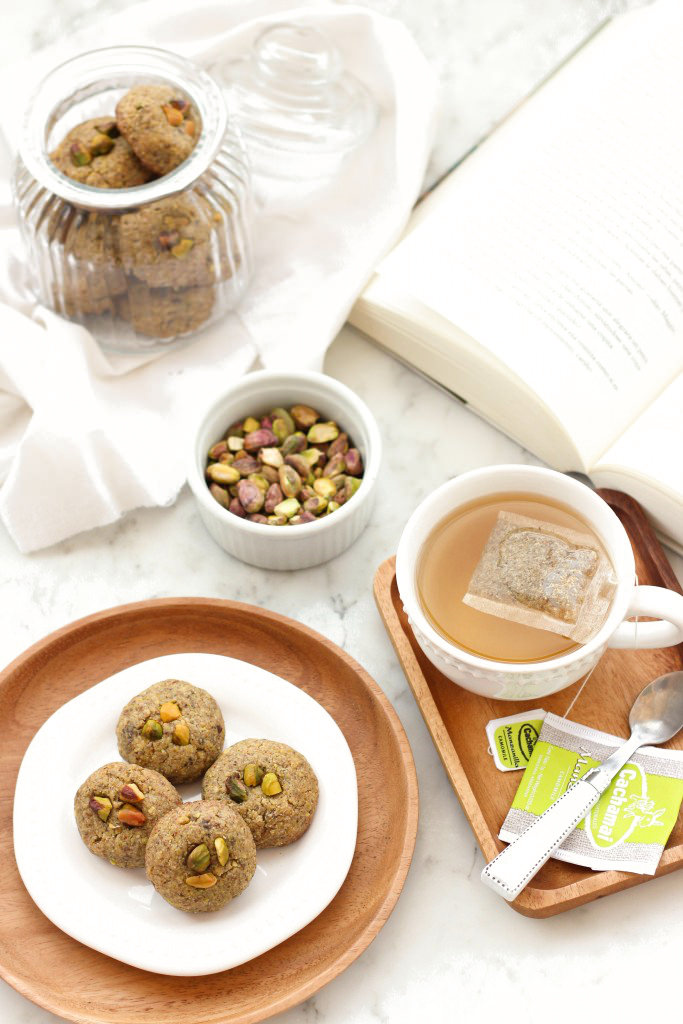 The fact that I’d come so close to losing my mum shocked me into action.

I’d already been experimenting with grain-free recipes before my mum’s heart attack, but after her operation, I was determined to eat better, and eat as grain-free as possible – because a grain-free diet naturally meant a diet low in carbohydrates and processed foods.

I started posting more and more grain-free recipes that I’d tested on the blog, recipes that my mum would be able to make and eat without fear of unhealthy spikes in her blood glucose levels.

I also managed to convince my mum to adopt a low-glycemic index diet (incorporating grain-free foods as often as possible), in order to minimise heavy spikes in her blood sugar levels.

After changing her diet, my mum lost around 14 pounds in 2 months, dropped two dress sizes, as well as showed amazing improvement in her hemoglobin A1c test – a test which measures a 90-day average of a person’s blood sugar levels.

(Have you been in a situation where you’d been so close to losing someone you love? Tell me about it in the comments or email me – I’d love to hear from you.) 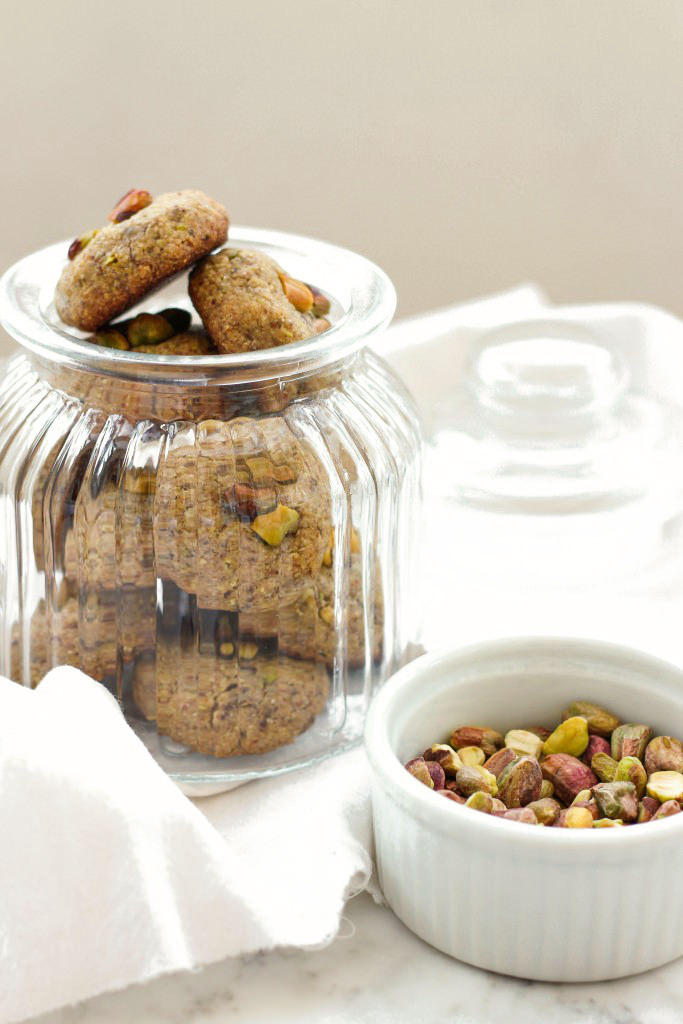 At first, I thought that the grain-free recipes on my blog were only benefiting my mum.

That was until readers whom I didn’t personally know began commenting on the blog and emailing me to tell me that some of the grain-free recipes on the blog had helped them lose weight as well as keep their hemoglobin A1c levels down. I was amazed.

A follower of the blog also recently told me that she’d gone from being pre-diabetic to out of danger of being diabetic simply by following a grain-free diet. This was just wonderful to hear! It confirmed that what I was doing with the blog is good; that it made a difference – and a positive one at that – in the lives of those who read it. 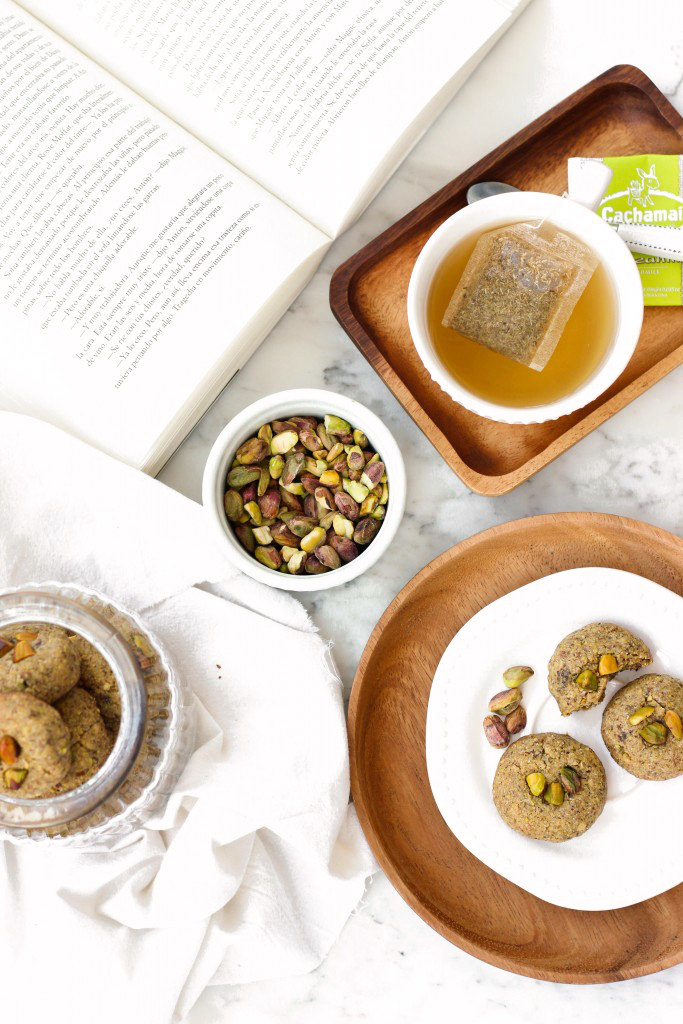 All the feedback I was getting from readers and my mum, as well as seeing how much better I felt on a grain-free diet, made me realize that I wanted to write a cookbook compiling the best grain-free baked treats from the blog.

Mainly, I wanted these recipes to be used and shared by those who read them, not just stay on the blog.

Now you know my reason for writing my upcoming cookbook.

The e-cookbook will be launched in the first week of July, and I am sooo excited!!! 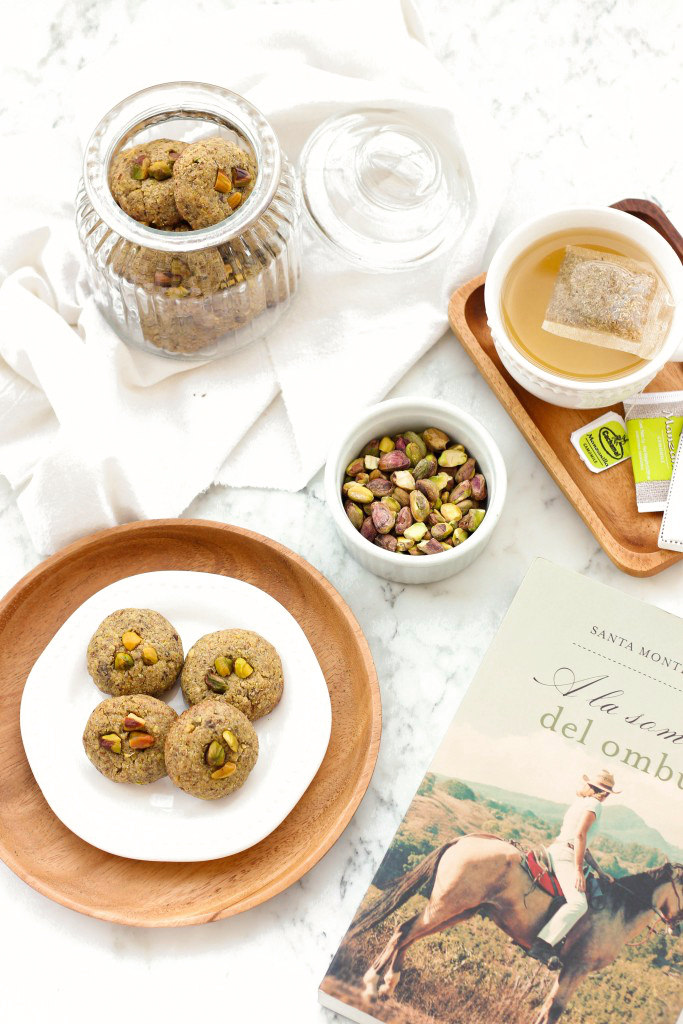 I’ve been eating these for breakfast every single day in the past week, and trust me when I tell you that they are a great way to begin any day! 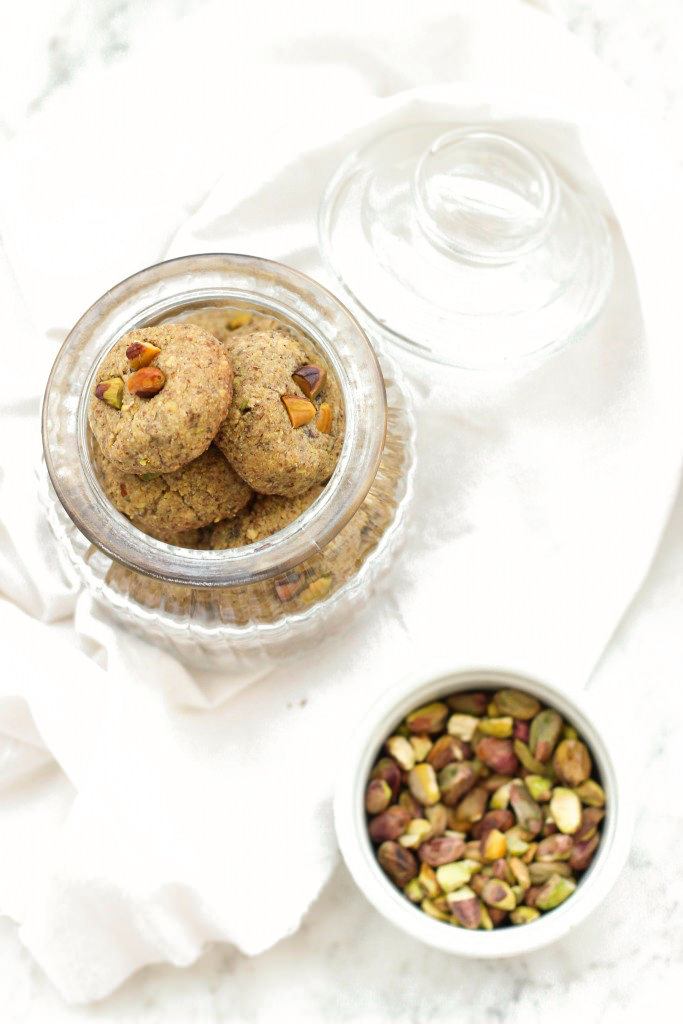 Chewy, delicious cookies made with mainly with pistachio meal and almond flour, and topped with chunks of pistachios.