When I started this blog more than four years ago, I didn’t think too much about how it would impact others. In fact, all I really wanted was simply a place to pen my thoughts and talk about the recipes I’d tried.

I’d blogged before in various other places, mostly about personal stuff and whatever I had on my mind. This time though, I knew specifically that I wanted to create a food blog. So one late afternoon in May 2012, I signed up for a account with WordPress, and after a few minutes of mulling over a name for the blog, I settled on “Dish by Dish” because it sounded catchy, was easy enough to remember and I figured that it was pretty obvious that the blog was about food. 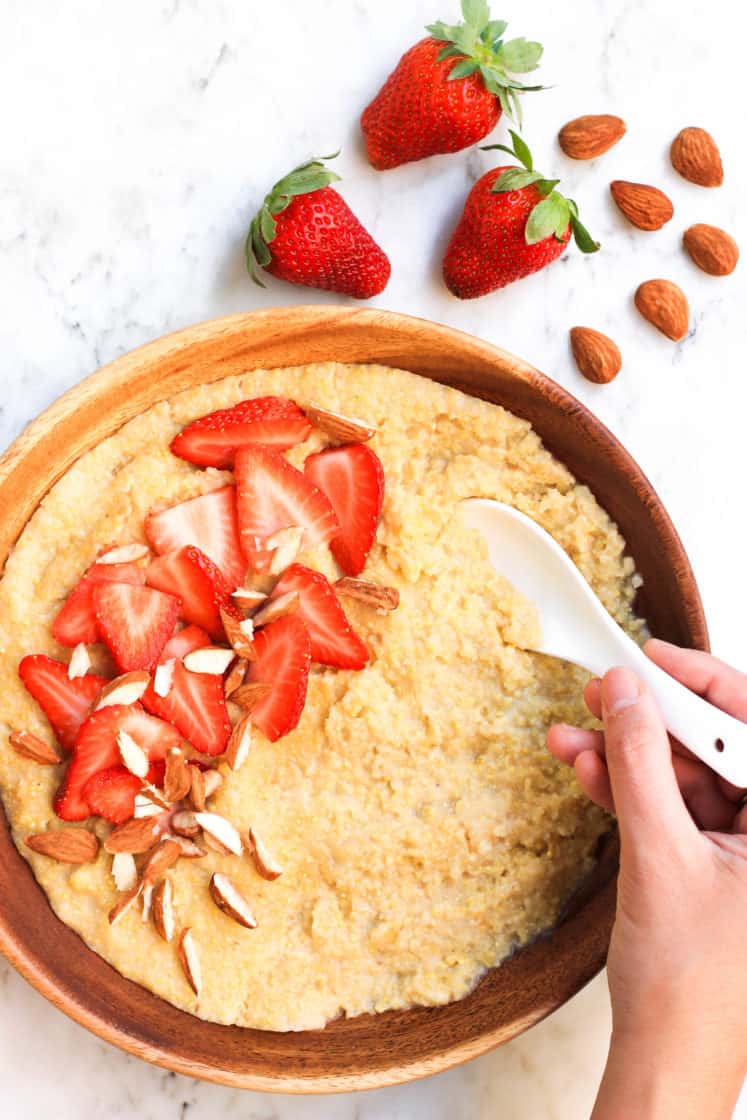 You know, in those first days of blogging over here, I wrote whenever I felt like it, without any rhythm or rhyme. I wrote to my one loyal reader, my dear sweet mum, and merely used this site as an online recipe journal categorizing the recipes that were lucky enough to be tested in my kitchen.

I didn’t know if there were other people reading, and at that point, I’m not sure I really cared. All I wanted to do was to write and put words into this new food blog world. 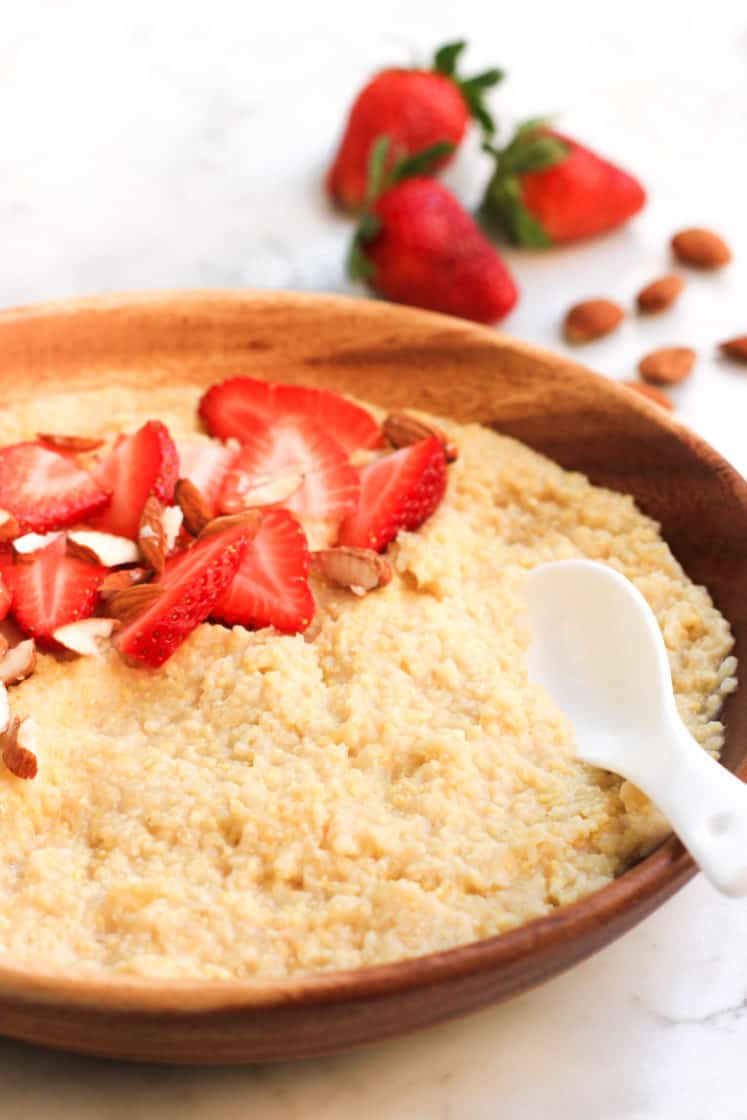 Some time later on, I started getting comments from people I didn’t even know. It felt like I’d just won the lottery. I mean…what!? There were other people reading my blog and actually interested enough in the post to leave a comment? How amazing was that?

Most of the comments were from readers telling me how the recipe turned out for them, and sometimes it would be a question about possible ingredient substitutions. It didn’t matter what they wrote though. What did matter was this: blogging finally started feeling more like a two-way conversation instead of a one-way monologue.

Suddenly I realized that maybe this little blog of mine was actually making some kind of a difference in the lives of people I’d never have met if not for the incredible invention called the internet. 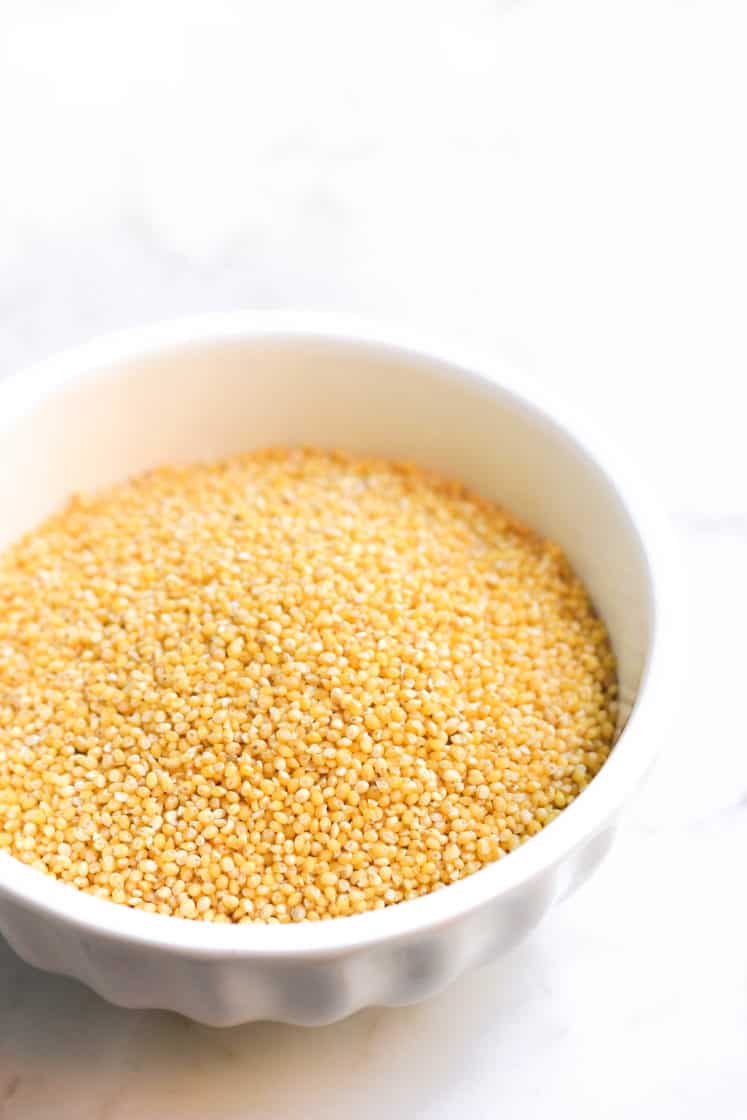 I started writing more purposefully after that, and decided that I would try to follow a consistent schedule and post at least once a week. With that goal in mind, I also figured that I should begin posting recipes that were healthier and that could help people eat and live better. I began experimenting with gluten-free recipes when it came to my attention that many people had issues with digesting gluten.

When a few readers commented that following a gluten-free diet helped them drastically reduce their stomach discomfort, I knew I was heading in the right direction: I was helping other people through this blog! 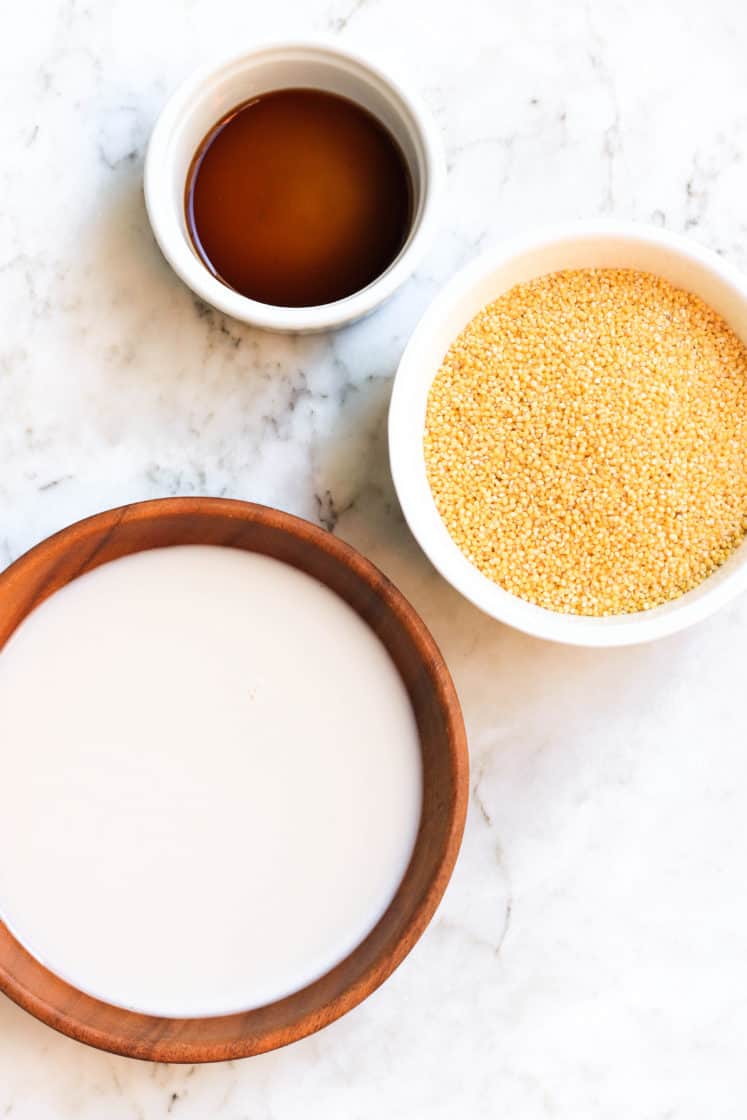 These days, one of the things that keeps me blogging week after week is this: I know for sure that each recipe I post has the ability to help someone feel better, physically and literally. I am convinced that each post I write leaves an impact, whether small or large, and it’s creating something good, somewhere in the world. In fact, this is probably the biggest reason why I enjoy blogging as much as I do.

Being able to make a difference is incredibly fulfilling – and my ultimate goal in life.

A few weeks back, Lena, one of my friends and long-time reader of the blog, replied to the weekly newsletter email telling me about her millet story (if you’d like to receive the free weekly newsletter too, you can subscribe here.) According to Lena, she used to suffer from gastric issues but is now better after incorporating millet into her diet. She’d checked my site for millet recipes, but because I’d never cooked with millet before, there were none. So, she asked, could you please post something with millet? 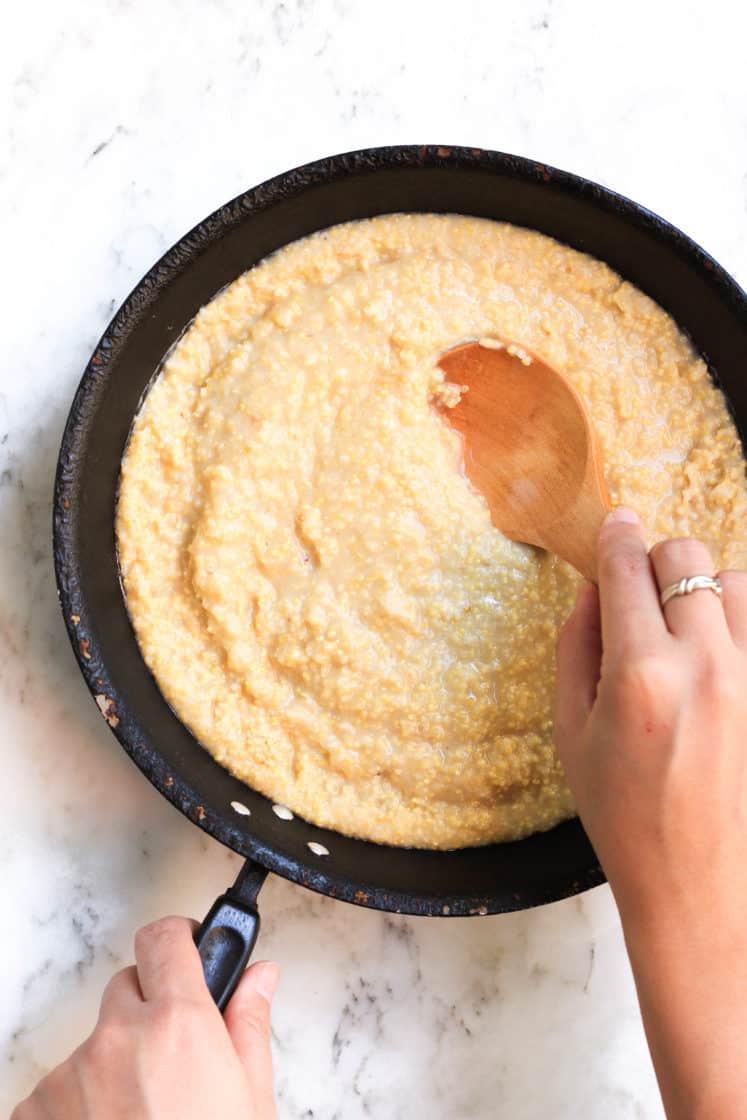 For a few months before Lena’s email, millet was already on my list of “to-try” ingredients. I’d see it at the natural food store every once in a while, and each time I’d wonder if I should pick up a packet of millet to experiment with. Each time I’d get distracted by some other ingredient and end up saying “Next time I’ll get millet. Just not today.” Yet millet was always there, somewhere at the back of my mind.

Naturally, when Lena sent me her email telling me how eating millet has helped her, and then requested for millet recipes, I couldn’t resist saying yes. Of course! Obviously!!

At this point I was now very curious about millet. First though, I needed to learn a little bit more about millet and the recipes I could make with it. After googling the internet a little, I found out that millet, while it does look deceptively like a grain, is actually a seed.

Apart from being naturally gluten-free, millet is also high in fiber and is a low glycemic index food, which means not only is it good for people who have issues with gluten (such as Celiacs like Juan or others with gluten allergies or intolerances), it’s also great for diabetics as it helps to maintain stable blood sugar levels. I also learnt that millet is actually alkaline in nature, which makes it easily digestible and is a good option for those with sensitive stomachs. 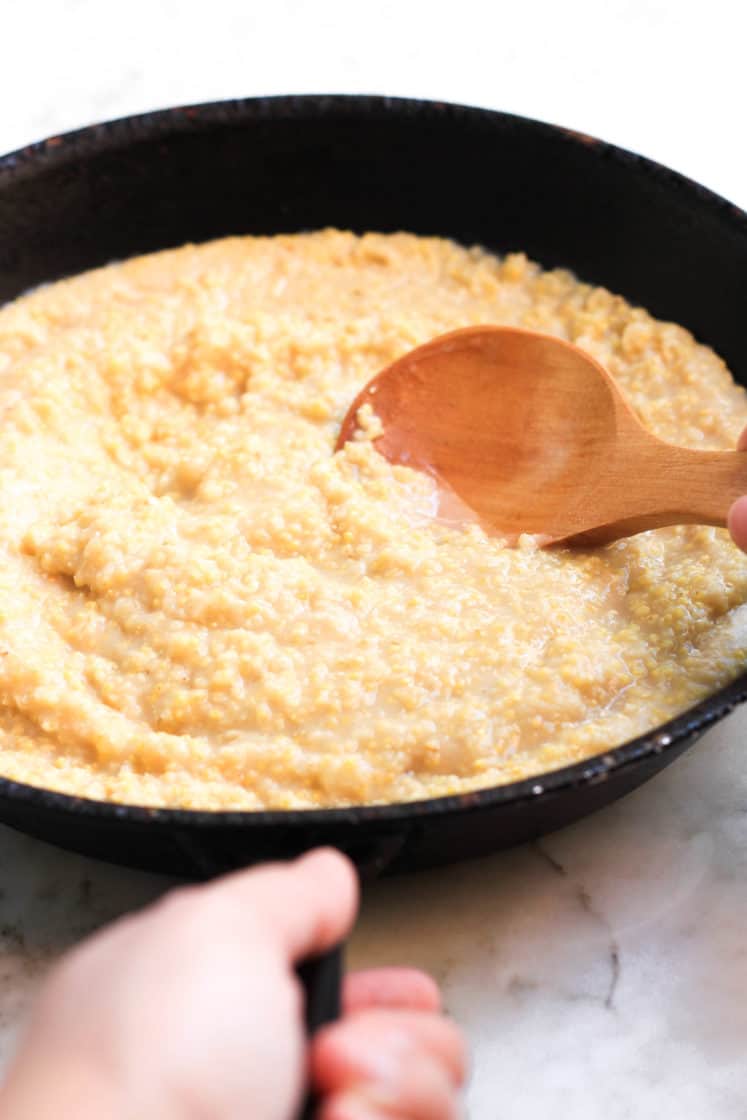 I wanted to try something creamier to start off my millet experiments, so I opted for a breakfast porridge.

(Lena, if you’re reading this, this recipe’s created with you in mind.) 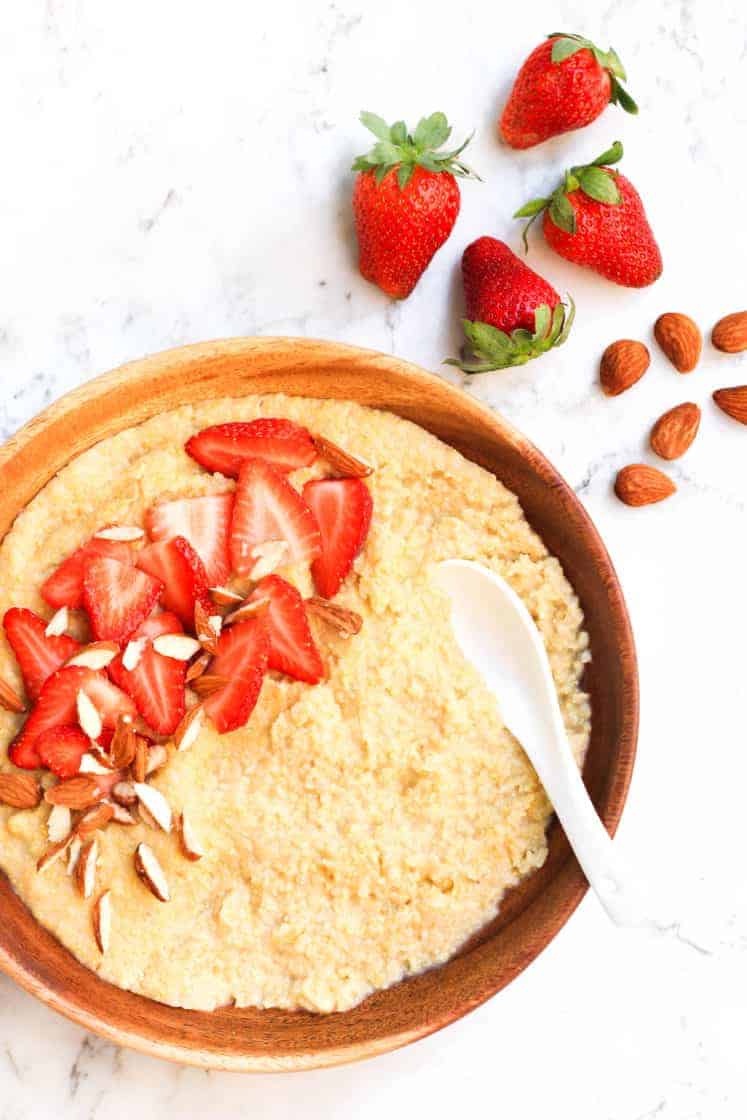 This creamy millet breakfast porridge is warm, filling and easy to bring together. Not only is it naturally gluten-free, it’s also vegan. How much better can this get?

All you need is one cup of millet, one cup of almond milk (or other non-dairy milk), three cups of water, two tablespoons of maple syrup and one tablespoon of vanilla. Combine the millet, almond milk and water in a large pot and bring it to a boil.

When the liquid starts boiling, lower the heat down to medium and let the mixture simmer for 20 to 25 minutes with the lid mostly on, until the millet seeds are cooked and tender and most of the liquid has been absorbed. Finally, add in the vanilla and maple syrup and stir well for another 30 seconds.

When everything is finally incorporated, serve the creamy millet breakfast porridge with sliced strawberries and chopped almonds. There you go – a delicious and nutritious breakfast in just 30 minutes. 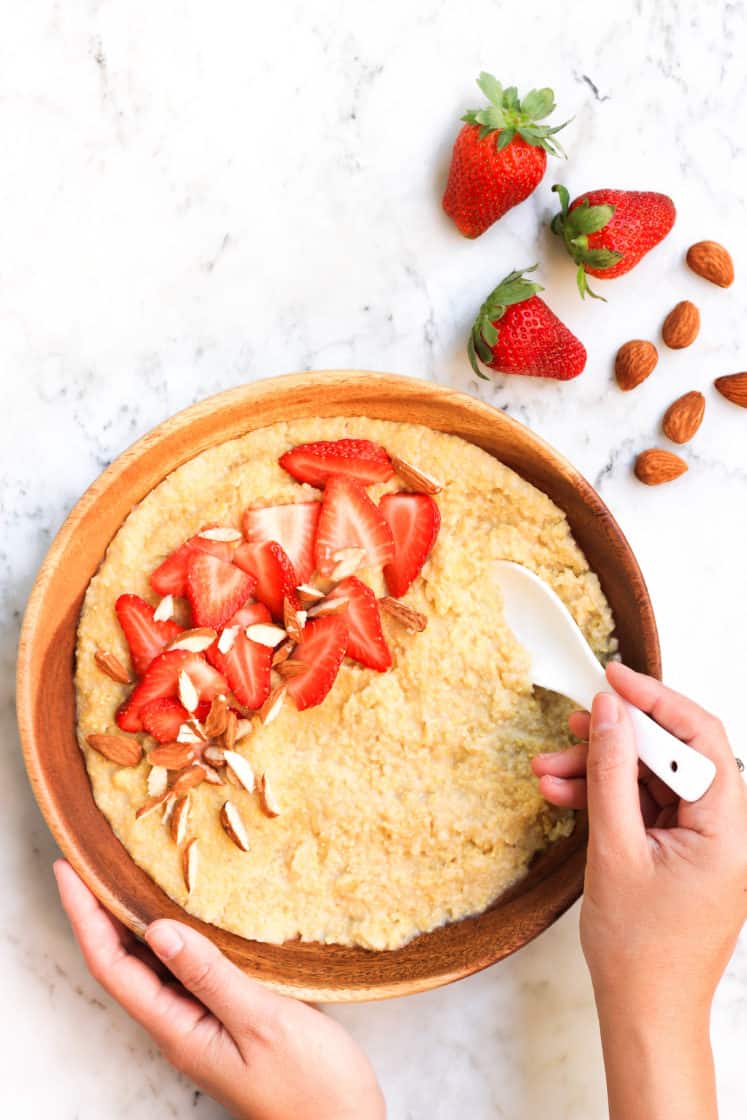 I personally like to make a big batch of the porridge and eat it over a few days. If you do that too, make sure to store the porridge in the fridge. The porridge will dry up a little in the fridge but that’s easy to take care of. When you want to eat it, simply warm it up with 1/4 cup of water in a small pot until the porridge is creamy again. 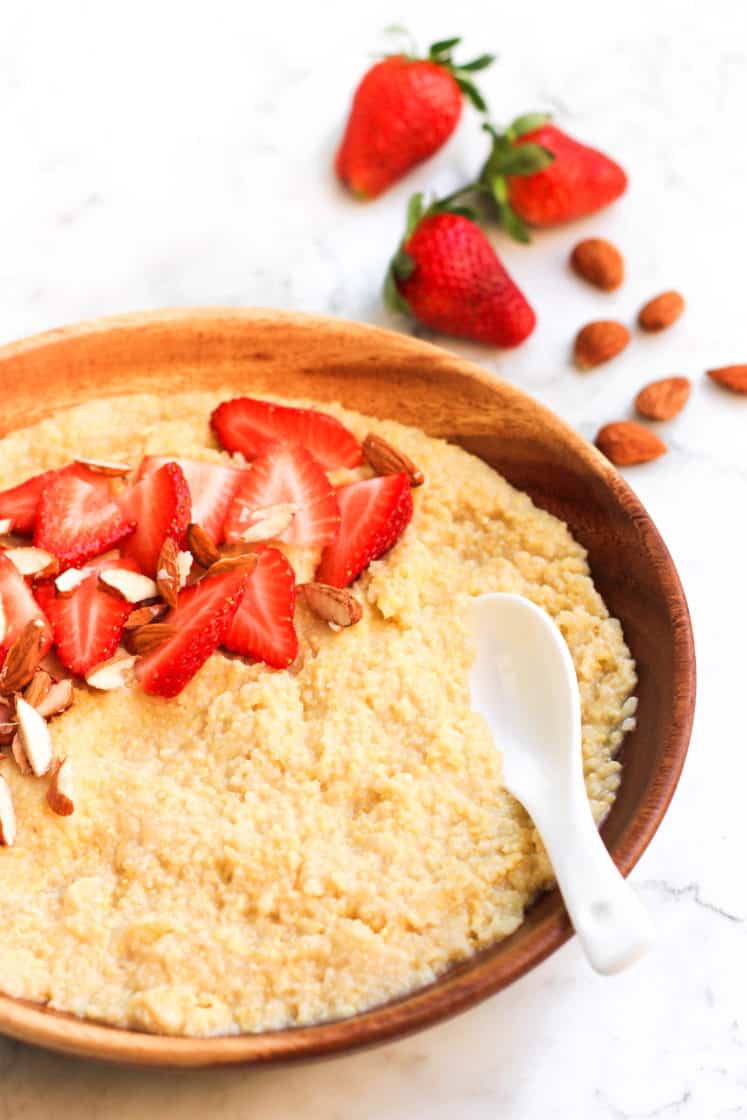 This creamy millet breakfast porridge is the perfect meal to start off your day. It’s filled with nutrients and fiber, it’s naturally sweetened and tastes amazing topped with strawberries and almonds. Plus, its gluten-free and vegan too!