You are here: Home / Dining Out / Homemade Pasta at Campo De Fiori

After months of planning, we finally made it!

In this case, our mission was to get us all together for dinner one night after our cooking class with Pelusa Molina. In celebration of us finishing our year-long cooking course, and with the aim of gathering together over good food and great company, a small group of us finally made it this week.

You see, the great thing about learning new activities such as painting and cooking, on top of acquiring a life-long skill, are the friendships that invariably come along.

Interacting week after week with like-minded acquaintances, these people inevitably become a part of your life, and whose trust and friendship you eventually gain. That’s precisely what happened with Agostina, Sonia, Valeria and Silvana.

I’d been looking forward to dinner with my cooking classmates since we started planning it.

The original date was set for  last Thursday night, but due to an unwelcome storm and accompanying hailstones, we had to cancel dinner last week and postponed it to this week. Because most of my classmates live very, very far away from the venue of our cooking class, we decided that the best option was to meet directly after class and dine at a restaurant nearby, so all of us would be able to make it.

Over huge plates of amazingly delicious homemade pasta and a long, intimate chat, we sat, ate, bonded, laughed and had a wonderful time at Campo de Fiori, an Italian restaurant specializing in homemade pasta.

I know that pasta is extremely commonplace and is considered cheap “student food” all over the world, a quick meal at usually low costs. But how much do we actually know about pasta?

According to Wikipedia, pasta is a type of noodle and is a staple food of traditional Italian cuisine, with the first reference dating to 1154. It is also commonly used to refer to the variety of pasta dishes. Typically pasta is made from unleavened dough of durum wheat flour mixed with water and formed into sheets or various shapes, then cooked and served in any number of dishes. It can be made with flour from other cereals or grains, and eggs may be used instead of water. Pastas may be divided into two broad categories, dried (“pasta secca”) and fresh (“pasta fresco”). Chicken eggs frequently dominate as the source of the liquid component in fresh pasta. 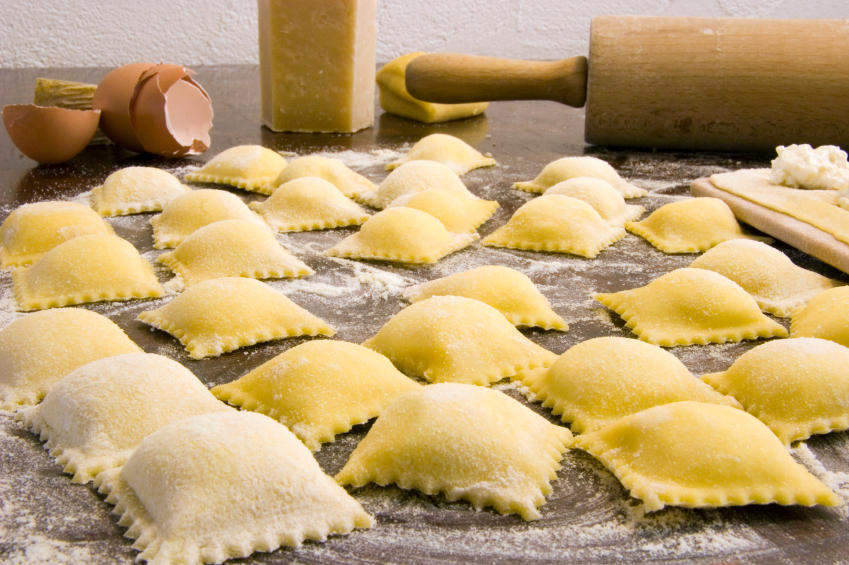 Wikipedia also tells us that both dried and fresh pasta come in a number of shapes and varieties, with 310 specific forms known variably by over 1300 names having been recently documented. In Italy the names of specific pasta shapes or types often vary with locale. For example the form “cavatelli” is known by 28 different names depending on region and town. Common forms of pasta include long shapes, short shapes, tubes, flat shapes and sheets, miniature soup shapes, filled or stuffed, and specialty or decorative shapes. Here’s Wikipedia’s list of pasta if you’d like to see the types available globally.

Pasta is generally a simple dish, but comes in large varieties because it is a versatile food item. Some pasta dishes are served as a first course in Italy because the portion sizes are small and simple. The servings are usually accompanied by a side of meat. Pasta is also prepared in light lunches, such as salads or large portion sizes for dinner. It can be prepared by hand or food processor and served hot or cold. Pasta sauces vary in taste, color and texture. When choosing which type of pasta and sauce to serve together, there is a general rule that must be observed. Simple sauces like pesto are ideal for long and thin strands of pasta while tomato sauce combines well with thicker pastas. Thicker and chunkier sauces have the better ability to cling onto the holes and cuts of short, tubular, twisted pastas. Sauce should be served equally with its pasta. It is important that the sauce does not overflow the pasta. The extra sauce is left on the plate after all of the pasta is eaten, or wiped clean with bread and eaten as they do in Argentina.

I’m a huge fan of pasta, but usually stick to the traditionally popular types of dried pasta.

Some of my past experiments with pasta include Spring Vegetable & Ham Spaghetti and Stir-Fried Mediterranean-Inspired Mostacholes. However, pasta comes in so many distinct shapes and forms and colors, it’s probably one of the most varied types of food available!

I remember being dumbstruck and gaping in awe at the countless pasta permutations when I visited Venice, Italy, in August 2007. They are truly a sight to behold… 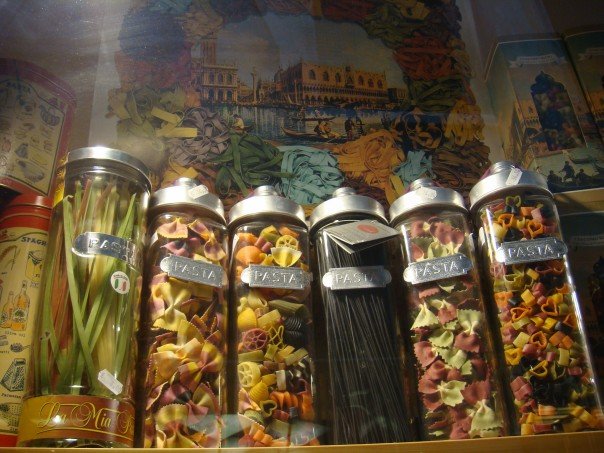 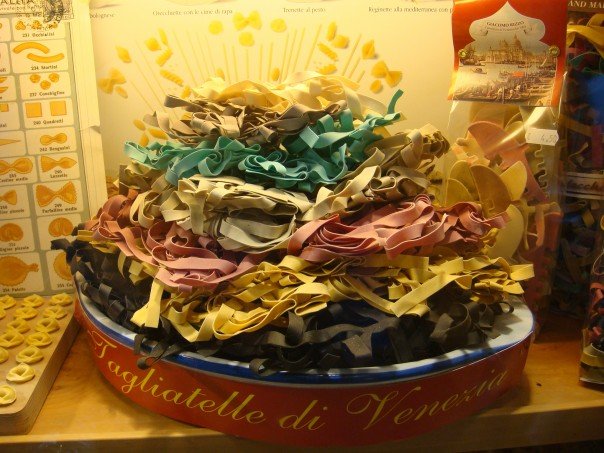 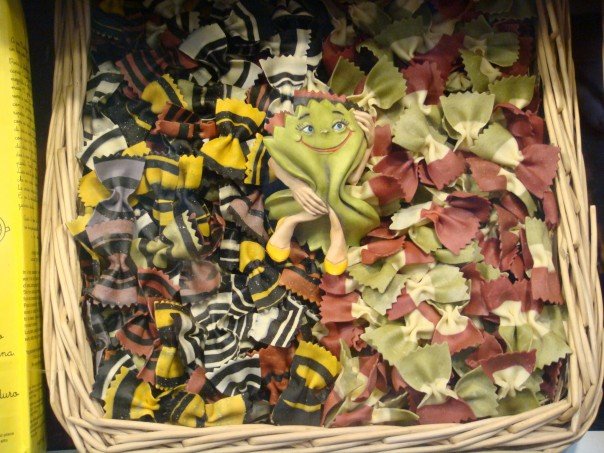 Ok, now that we understand a little bit more about pasta and have seen some of its enormous variety, let’s get back to Campo de Fiori, where a hot plate of stuffed pasta in a mushroom cream sauce is waiting for me!

Campo de Fiori is a franchaise with various branches, and we ended up at the Villa Crespo branch (situated at Julian Alvarez 299, Buenos Aires) mainly out of chance, because the other restaurant that we originally wanted to go to was too full, with a queue that would have lasted at least 30 minutes in waiting.

We finally arrived at Campo de Fiori, after 20 minutes of driving around cluelessly in the Villa Crespo neighborhood that none of us were familiar with, and finally resorting to using the GPS to guide our way. 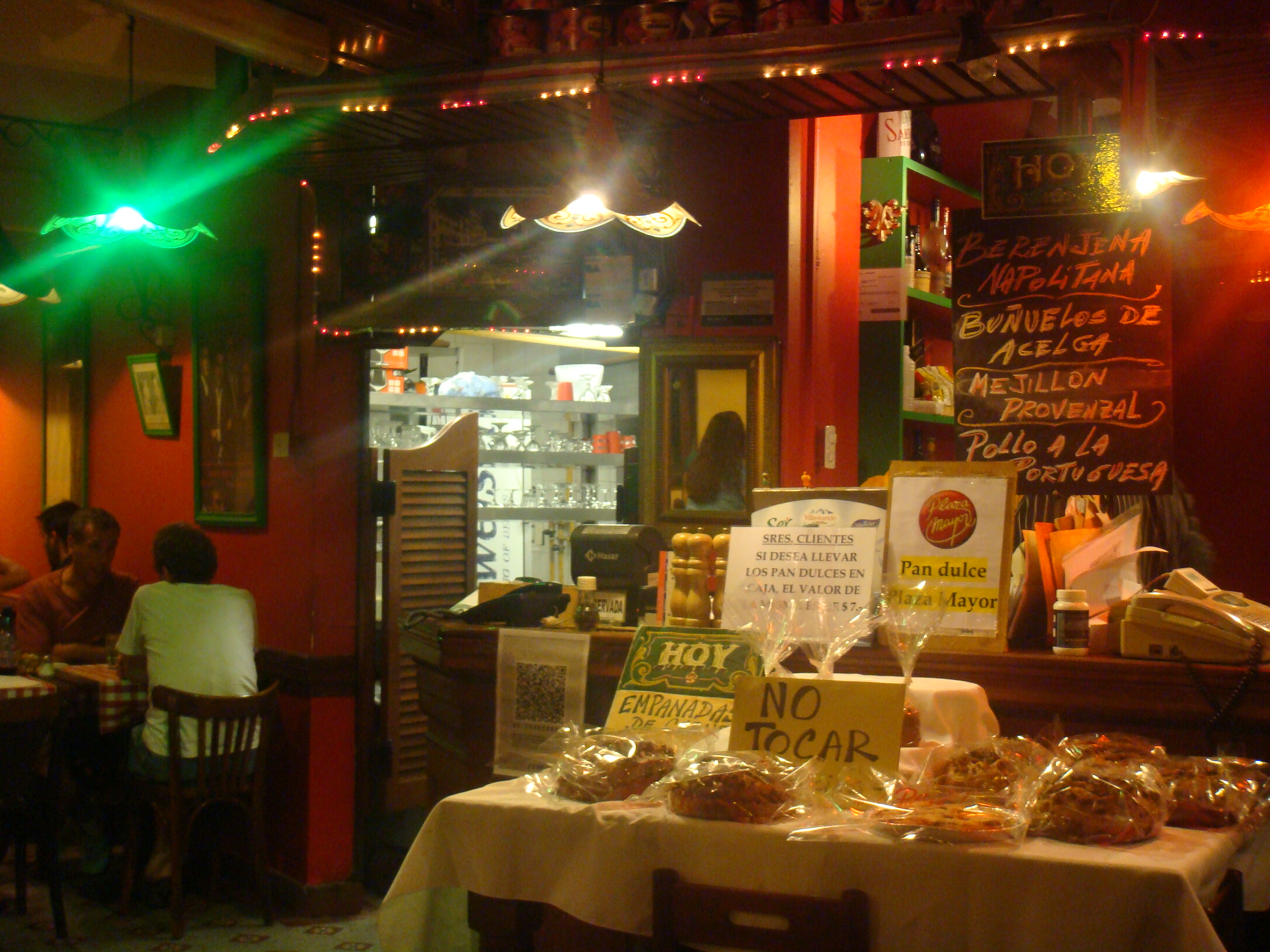 The bar in Campo de Fiori, with a table full of “Pan Dulce”

Thankfully there was no queue, and we sat down at a table by the window, with a red-and-white checkered tablecloth so characteristic of classic Italian restaurants. 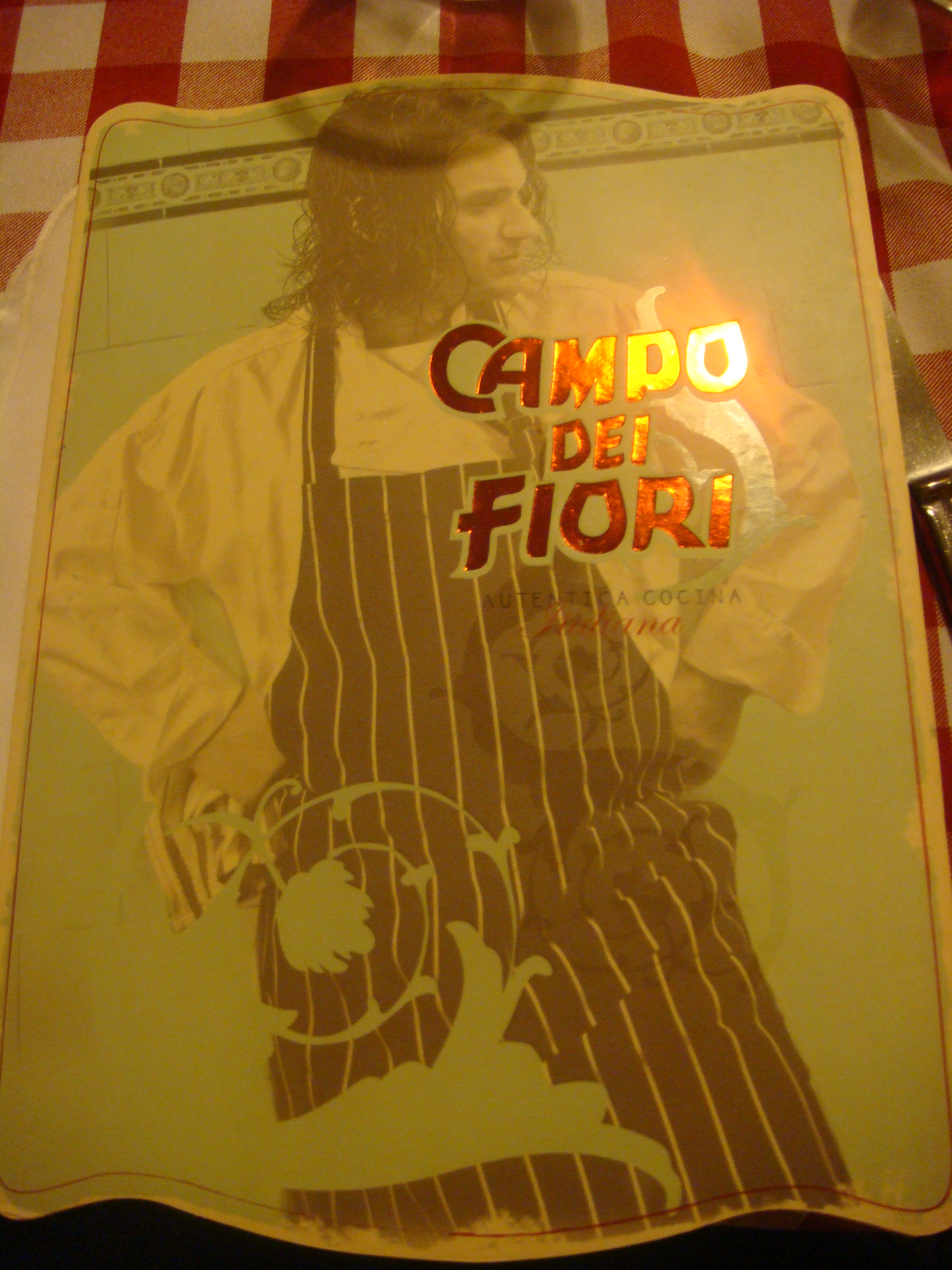 The menu, with a typical Italian-looking man on the cover

As we pored over the long list of pasta and accompanying sauces available in the menu, we were stumped for choice.  There were simply too many different types of pasta – fresh or dried, plain or stuffed – all with a variety of exotic-sounding names such as Caramelitos, Romanitos, Spaghetti alla chitarra, just to name a few and impress you a little.

After various suggestions from our very kind and patient waiter, I finally decided on which pasta to feast on.

I ended up ordering Romanitos (similar to round gnocchi or sorrentinos stuffed with ham and mozzarella cheese). I was itching for the strong taste of mushrooms and a creamy sauce, which was both very abundantly delivered in the Panna e Funghi sauce, which consisted of onions, garlic, olive oil, parsley, marsala wine, button mushrooms, dried mushrooms and cream. 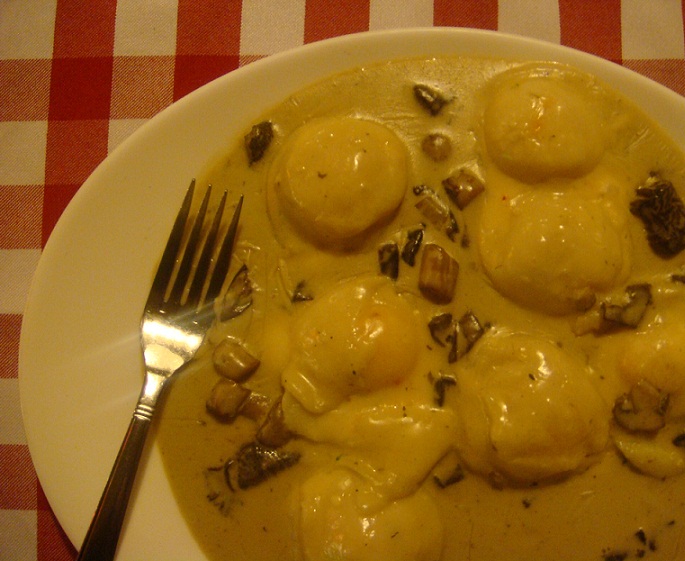 The texture of well-kneaded, fresh, homemade pasta is the mark of difference; I also personally think that the taste is so much richer, precisely because fresh pasta hasn’t gone through a drying process (and lost its flavor in between).

It was a really good idea to finally try the well-known Campo de Fiori (even though it was completely by chance and unintended), which left us very satisfied and full, for a total of 115 pesos per person (tips included). Although it was slightly expensive for just a plate of pasta and a canned drink, the quality of homemade pasta cannot be denied, and is the precise reason for the price premium.

The best part of all? Bonding together over hushed conversations and tasty food. We’re definitely going to have to do it again, this time with Silvana! 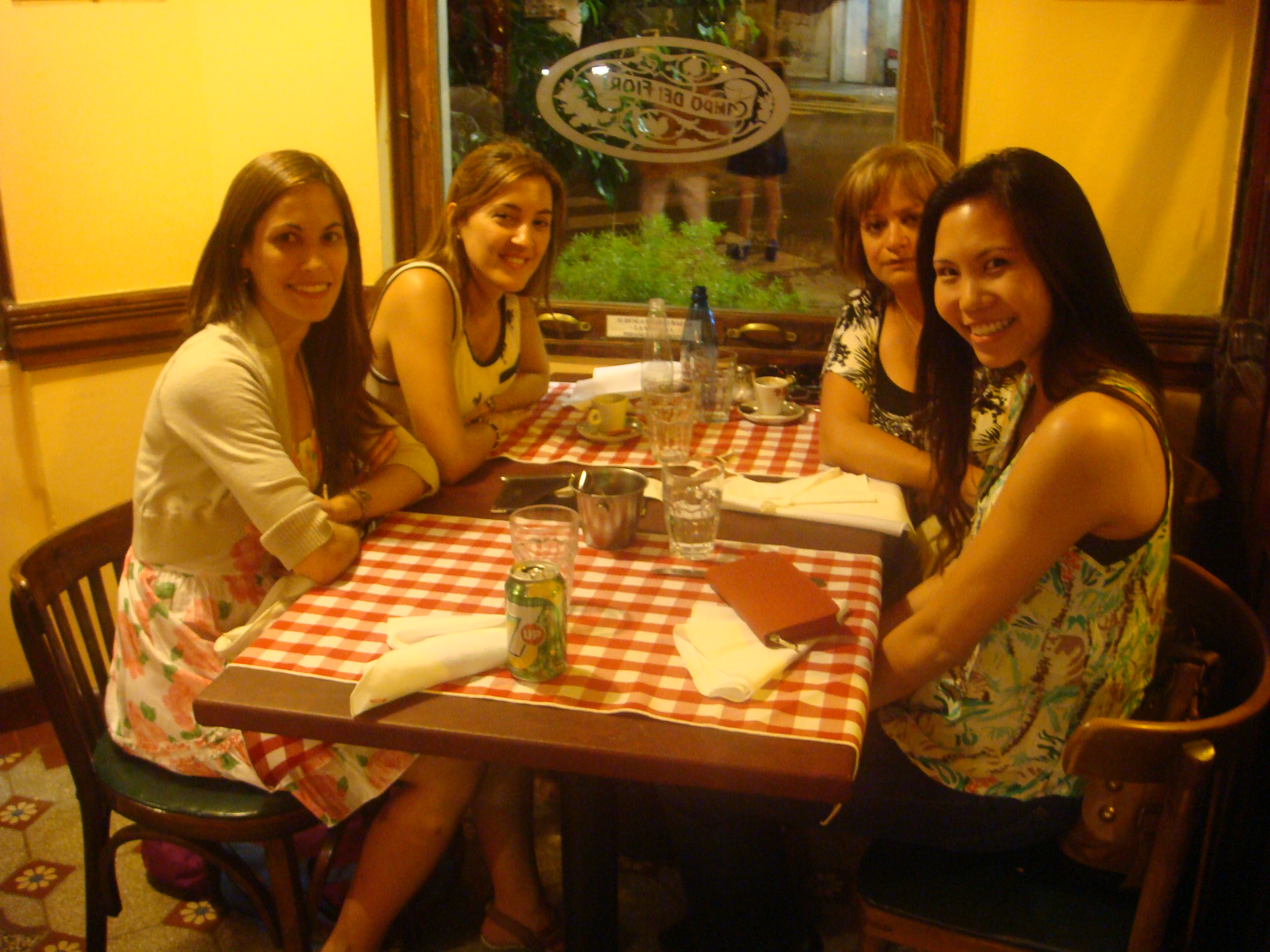